Sorry, Jami Website is not available in your language at the moment, but we are working on it! We offer the English language, by default.
Ok, thank you I want to help with the translation

In one of our previous articles about Swarm we promised to go into more details about how it works, and today we uphold that promise. Let's jump right in!

Why synchronizing history was so challenging

Until recently (before Swarm), when you sent a message to one of your contacts via Jami, Jami would only send the body of the message to your contact, and wait for the confirmation. Basically this is how things worked with non-Swarm conversations: 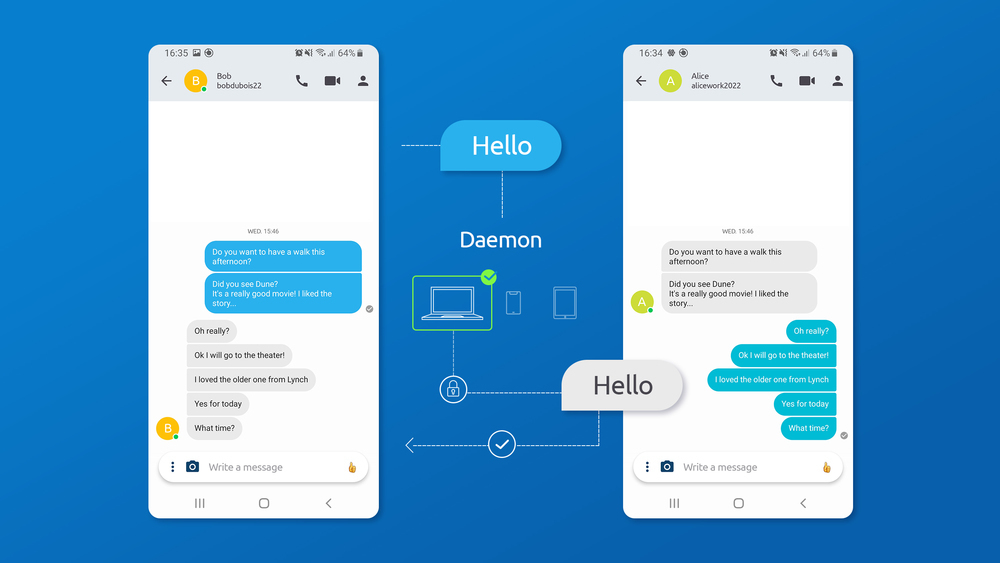 The mechanism was simple, but glossed over a lot of details, making it nearly impossible to synchronize conversation histories and really difficult to scale it up to group conversations. To list a few shortcomings:

This is why we needed a new system for messaging, and to store messages in a better structure, to enable synchronizing messages between many devices in a reasonable way.

A structure to synchronize

Conversations in a distributed network cannot be considered in a linear fashion. In fact, not all devices may always be online at the same time. And since there are no servers to store the conversations, the devices will have to. So, the best way to imagine a distributed conversation is with a tree data structure, where each device in the conversation has a subpart of this tree. For example: 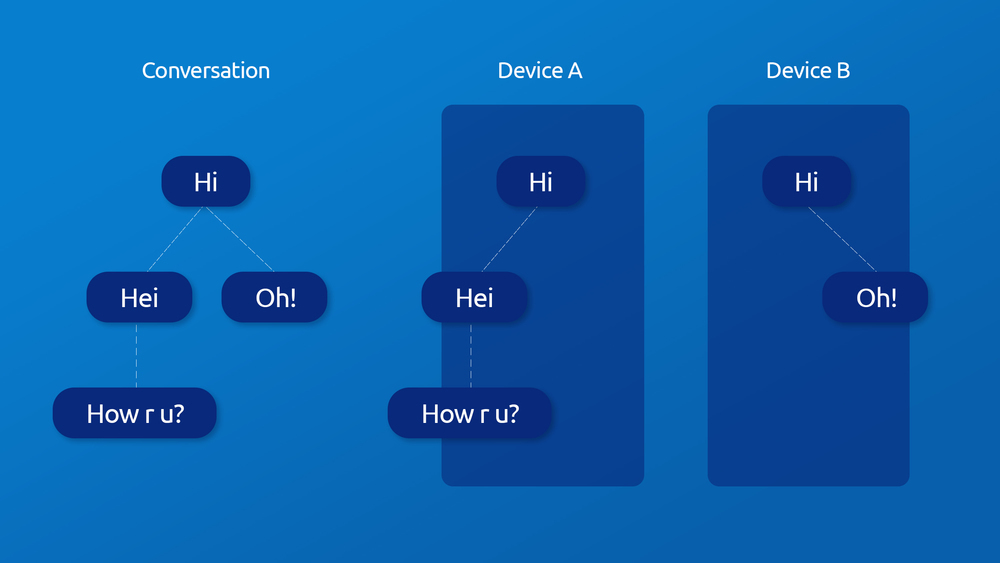 It could be much simpler and more reasonable to synchronize this tree structure across devices, since we could directly synchronize part of the trees and easily identify what parts are missing. Moreover, messages are ordered, because we know the id of the previous message for each message. This kind of structure already exists in the wild, so we wouldn't have to reinvent the wheel, and could use known protocols for that. One of the most used protocols that provides this kind of structure and the ability to synchronize it in a distributed environment is Git, which is already widely used for many different use-cases, using tools such as the libgit2 library, and has many of the features that we would like, such as signing commits with keys. This is why we choose to use git as the foundation for Swarm conversations and storing them. Although using a tree to represent a conversation brings a lot of improvements and enables new possibilities, it does have its own problems.

So, with Swarm, this is how a message is sent: 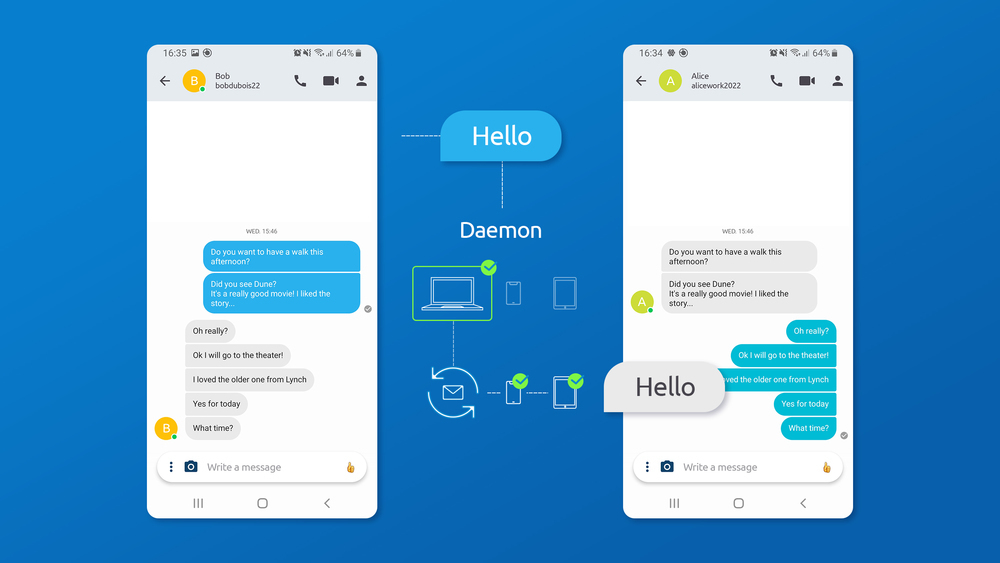 What is a message?

One way to look at Git would be as a tool based around synchronizing a tree of commits. In part due to this reason we decided to store each message as a commit (rather than, say, a file) in the corresponding git repository for that conversation. We can divide a git commit into three parts:

The two first parts are the most interesting for our use-case of Swarm, and the last one is for the most part not used for Swarm (will explained why later in this article). The commit message can be used to store the messages in the format we want, and the metadata can be used to store information such as who wrote the message. Finally, the signature mechanism in git lets us sign messages with the device's key, and to verify that messages are coming from an authorized peer.

In Jami's Swarm conversations, each message can be of one of the following types (with the possibility of adding more types in the future, if needed): text message, file transfer, call, or member event.

Displaying a tree of messages is not user friendly. Even with applications that support threads, the history is typically displayed as a linear conversation with links to the parent. So, the tree must be linearized for displaying. However, there are multiple ways to linearize a tree. For example for the following tree: 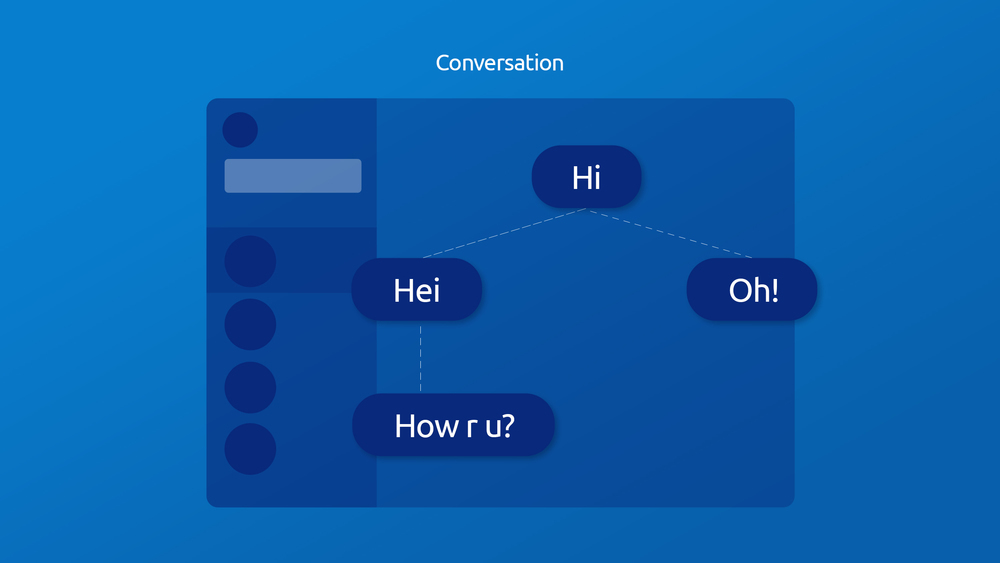 "Hi, Hei, Oh!, How r u?" and "Hi, Oh!, Hei, How r u?" are two valid linearizations, even though the tree here is very simple. Timestamps could be used to organize messages, and it would work most of the time, but in a distributed system, one cannot necessarily trust the time of other devices; it may have been modified and differ with the current device's time, intentionally or not. So, "How r u?, Hi, Hei, Oh!" could be a valid output. That's why we chose to display messages after first sorting them topologically (parents before children), then chronologically by timestamp. This means that even if How r u? has a timestamp older than Hi, it will always be displayed after Hei.

Even if a conversation needs a lot of data synchronized across devices, it's not the case for all messages. Some messages will still be ephemeral and exist for a few seconds, typically those that really only make sense for a limited time and in an instantaneous setting, namely: typing indicators, message read status, or location share. More ephemeral message types could be added in the future if need be.

In that case, these ephemeral messages will not appear in the git history of the conversation repository, but will only be sent to those devices in the conversation that are online at that moment.

Generally, when using git, multiple people may modify the same files at the same time, resulting in a conflict when synchronizing, which must be resolved. It's clear that we cannot and should not ask everyday Jami users to manually resolve such conflicts in their conversation histories. That's why as we mentioned earlier we almost never use the third part of commits (changed files and their diff) in Swarm git repositories. Conflicts can only arise in the diff part of commits, so we prevent them by storing the conversation messages as commits messages, and very rarely add files in the repository; and in the cases where we really do need to add or modify files, we do it in a careful manner that avoids conflicts or results in conflicts that can be automatically resolved by git.

Will file transfers be synchronized in the repository?

No, not presently, and this is for two reasons. First, as mentioned in the last section, we must avoid any potential conflicts, and adding files would make that significantly harder and more complex if not impossible. Second, Jami must be able to work on devices with low storage capacity, so we will never force a device to receive and store big files if the user does not accept it. We recently refactored and reworked the Jami file transfer system for Swarm, and we plan on publishing a more detailed article about the new file transfer system and how it works with Swarm in the near future.

Some of the Swarm-related features that can now be tested are as follows: 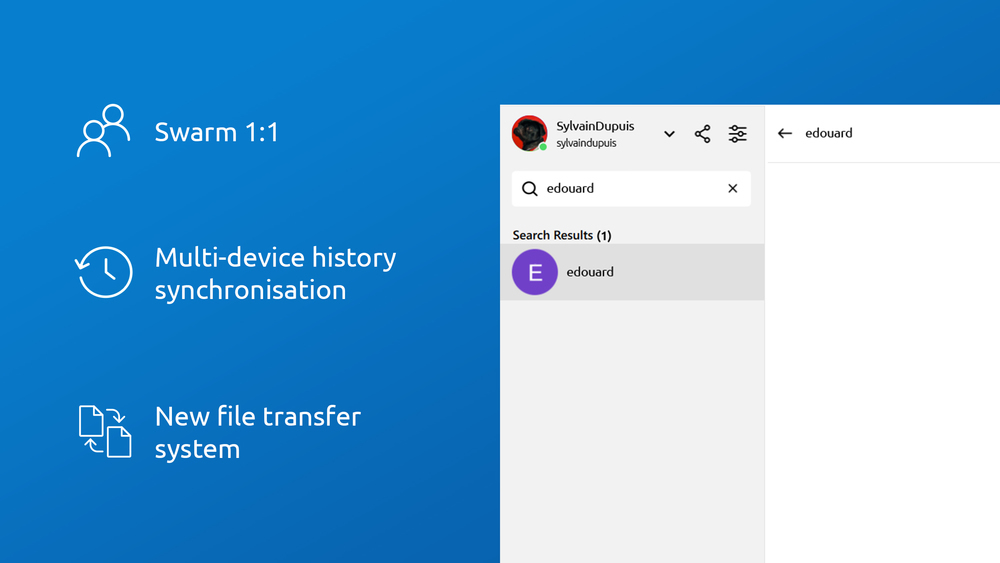 As seen in recent articles on the Jami blog, there are a lot of new features included in Jami client applications. Additionally, the Qt-based Jami desktop application also has the following abilities:

The mobile applications of Jami currently only have partial support for these two features, and work is underway for advancing and improving their implementations.

If you notice or experience any problematic scenarios, please see the bugs and improvements page and our bug report guide for more details on how to report issues.

Thank you for using and supporting Jami!